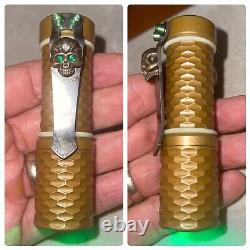 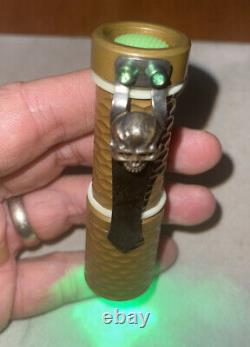 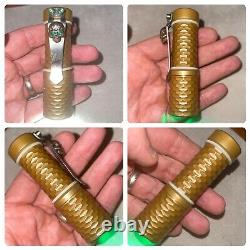 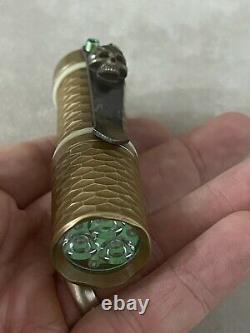 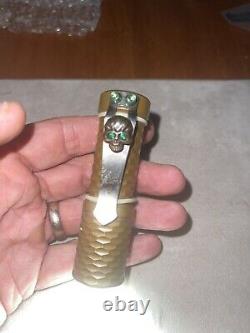 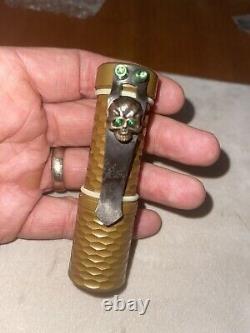 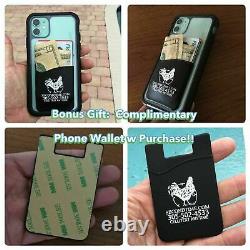 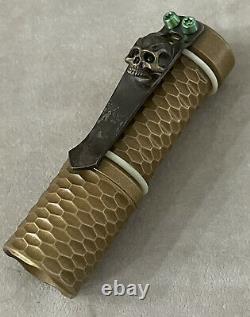 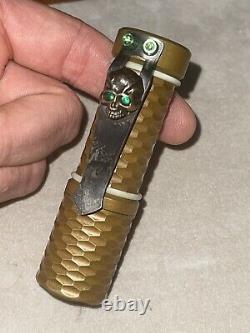 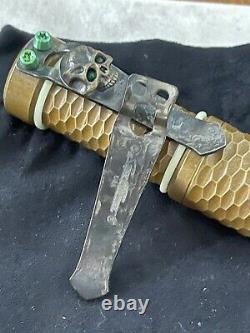 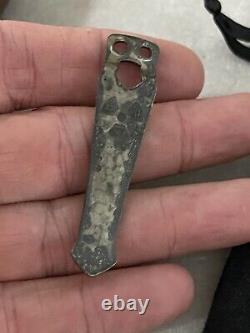 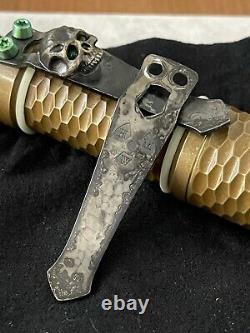 Oh man, this is one of the coolest Hanko Custom Torches You Will Ever See! This is no ordinary Hanko Flashlight. I took this flashlight in trade from its original owner, a well-known and die-hard Flashaholic with more than 500 custom Torches. It looks like this torch was a serious safe-queen, probably shown to buddies and enjoyed a handful of times, I'm thinking carried a handful of times (if that). This Torch is outfitted with some amazing features and accents which make this Hanko Torch especially rare and unique.

The owner of this Hanko called this one his'Green With Envy' torch - read below and you will see why.... First Generation Hanko Trident Flashlight Torch in Brass with (full) Gunner Grip on both head and body with Stonewashed Finish.

This is one of the first generation Hanko's as indicated by the wider/longer collar which starts just underneath the head of the flashlight. (You can see on later Version Hankos, that collar is much narrower and gives the flashlight a totally different look and feel). IMO The coolest features of this Hanko flashlight are. Green Secondary - This light has a set of 4k LED's and also has a secondary Green light. The Green is crisp and cool. Titanium Green Anodized clip screws and Glow in the dark green gaskets on barrel and tail - these looks so cool accented by the Green Eyes in the Pocket Clip. Original (and unmodified) Steel Flame 3D GReen Eyed Warrior Torch Clip - This original Steel Flame 3-D Torch Clip features a Warrior Skull (Missing lower mandibular) with Green Emeralds (most likely synthetic but factory applied by Steel Flame) in the eye sockets.

I've never seen another one of these 3 Amigos clips with BLUE eyes available for sale! (And if you prefer to preserve this ultra rare Steel Flame Green Eyed Warrior Torch Clip, included with this Hanko Flashlight is the original Hanko Machine Works/HMW Torch Clip made by Steel Flame which features Hanko'HMW' logo on top side and Steel Flame stamp on underside). Additional accents and features include.

Green glow disk (installed by original owner). This is a pre-owned flashlight with only the slightest visible signs of occasional and careful use. Powered by(1) e-Fest IMR 16340 battery will be included with flashlight and ready to use out of the box!

And features programmable CWF Dragon driver with white primary and GREEN secondary. All pictures are of actual item. WYSIWYG - What You See Is What You Get.

I've traveled the world and haven't carried a wallet since 2015 thanks to this amazing, handy and awesome rubber wallet. All pictures are of the actual item offered for sale. I have tens of thousands of references, credentials testimonials and online articles written about me from 20+ years in the watch business as founder of WatchUWant, Hollywood Florida (now Watchbox).

The seller is "oj_secondtime" and is located in Hollywood, Florida. This item can be shipped worldwide.